This is third episode of my Data Coding in Bash series.

In this article we will do the first steps with basic mathematical and statistical functions that will get us closer and closer to doing actual data science in the command line. Plus we will also start with bash scripting!

Note 1: to get the most out of this article, you should not just read it, but actually do the coding part with me! So if you are on your phone, I suggest you save this article and continue on Desktop!

Note 2: If you don’t have the data infrastructure yet, you can install it on your own in roughly 30-60 minutes: Data Coding 101 – Install Python, R, SQL and bash!

Note 3: If you haven’t read it yet, I suggest starting with the previous bash articles:

Just for the record! I do like pre-built statistical, mathematical and predictive analytics packages and modules, regardless of whether we are talking about Bash, Python or R. However what I do not like is a data scientist who is not 100% aware what’s happening in the background when he/she uses this pre-built stuff. I’m a big fan of learning by doing, so in my opinion the best way to make sure you understand the math behind these packages is if you actually build them yourself – at least once in your life.

And we will start with the easiest ones: MAX, MIN and MEDIAN.

Now back to the command line! 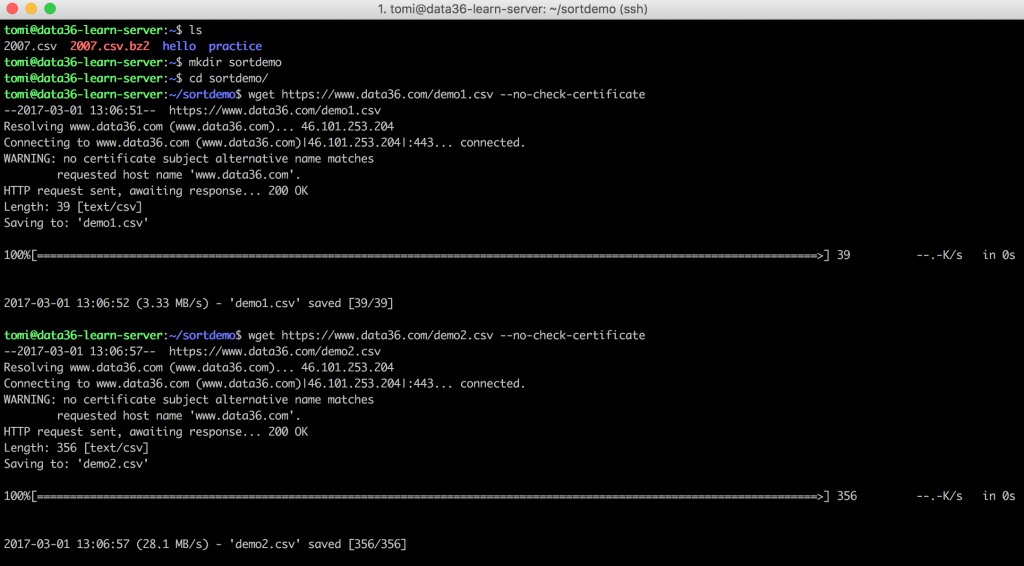 Use cat on both files and you will see that demo1.csv contains random numbers and demo2.csv random names. (Generated by a random generator by the way – so if you find your name on the list, that’s only an – epic – accident.)

There is a pretty easy-to-remember command line tool in bash to sort things with… It’s called the sort command.

This is what you will get back:

Try the same on the numbers:
sort demo1.csv

And the result is:

While this works really well on the names, it causes some confusion with the numbers. Fortunately you can let sort know that you want to sort numbers and not words. You should add an option: -n (“numeric-sort”). Type this to your command line:

Now we are talking!

Good! sort is pretty straightforward! Here are some more options that you will find handy. Try them one by one!

sort -r demo2.csv –» -r means reverse. Instead of an ascending list, you will have a descending list.

sort -r -n demo1.csv –» It works with numbers as well if you add the -n option too (e.g. it could be useful for creating a top-down list).

sort -n -u demo1.csv –» Remove duplicates! It returns every repeating value only once. (U is for unique.)

sort -t’,’ -k2 -n filename.csv -–» You can’t try this on demo1.csv, but feel free to go and try it on the flightdelays.csv file. -k means “key” and -k2 tells sort that the key of the sorting should be the second column and not the first (which is the default). But as per usual, bash doesn’t know what character is separating your columns, so you should specify it with -t’,’. It’s pretty much the same thing -d’,’ did for cut. Then you might ask, why is the syntax for the same option different: -t for sort and -d for cut?

I have three answers for this:

This is not the only time you will see inconsistency across command line tools, so it’s just better to get used to it!

Now that you have learned sort, go back to your flightdelays.csv data set.

I have 3 exercises for you. All three are doable using some of the command line tools you’ve learned so far.

(Note: what MEDIAN is? Learn it here: Statistical Averages – Explained.)

Spend some time trying to answer these questions. Once you are done, continue reading and you will find my solutions.

Solution for MAX and MIN

(minutes… Which is 43 hours. I would not like to be on that plane.)
To get the result, this should be typed to the command line:
cut -d',' -f15 flightdelays.csv |sort -n |tail -1
With the cut command, we can keep only the 15th column, which is ArrDelay. Then we pipe this data into sort -n. Eventually we print only the last line, which is the actual maximum value that we were looking for.

(which means the plane was 6 hours early.)
The approach is pretty much the same:
cut -d',' -f15 flightdelays.csv |sort -n |head -1
The only thing I’ve changed is that instead of tail -1 I put head -1 at the end, which gives back the first and not the last number of the sorted column.

STEP 1) discover the data:
cut -d',' -f15 flightdelays.csv –» Never miss this step! Keep watching your terminal screen and you will realize that you have some missing data (NA) and an unnecessary header (ArrDelay) in your data set. Both of these should be removed.

(Note: in real life data science we have tools other than just watching the screen. We are not there yet in my tutorials, but soon…)

Our winning numbers are:

The Median is the mean of these two: 0.

Note: Notice how iterative bash is! We get the results in 3 steps, with little modifications of the command at each step.

Text-editor for the command line

So far we have interacted with bash only by typing different commands directly to the command line. But you can use text editor tools too. Well, it does not look exactly the same as you’ve gotten used to in Windows/Mac… 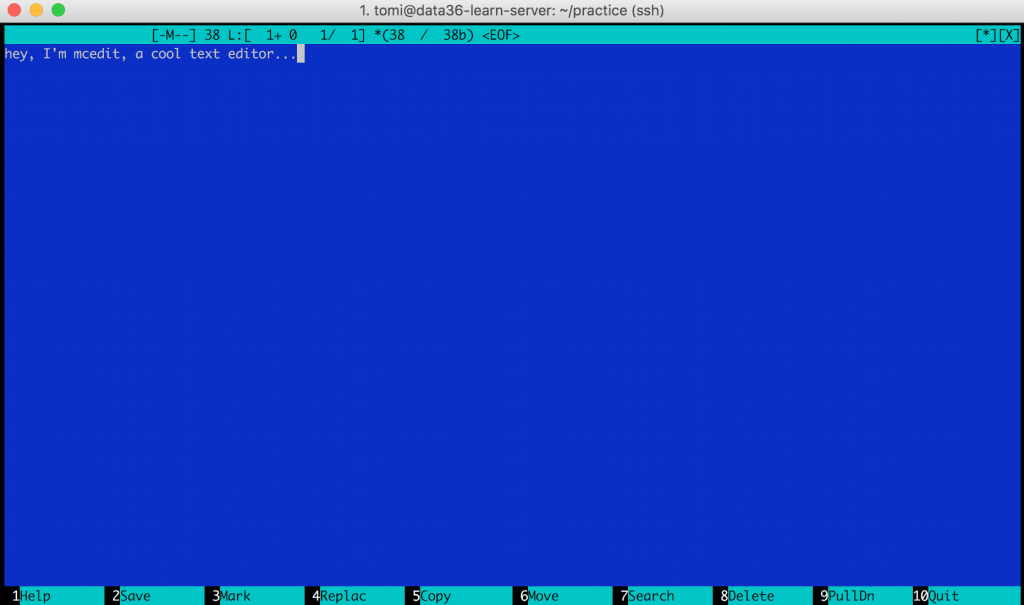 Anyway. When you have set up your data server, you have also set up mcedit. If you didn’t, please do it now:
sudo apt-get install mc
(Type your password. And if it asks if you want to continue, just say yes.)

Once it’s installed, open the mcedit command line tool:
mcedit
Boom! Ready for text-editing! (You should see the same blue picture that I have attached above.) What I particularly like in mcedit is that you can use your mouse here (finally, back to graphical user interfaces)! So when you want to exit, you can click the “Quit” button in the bottom right corner – or when you want to search something, you can click the “Search” button on the bottom menu.

Anyway – type some text in, click the “Quit” button and save your file.

You will have a new file in your folder that you can print like every other file – with the cat command.

If you want to modify this file, just go back to mcedit:

Print unique values and count them!

Let’s create a new text file with some numbers in it!
mcedit demo3.csv
Let’s add these numbers to your file: 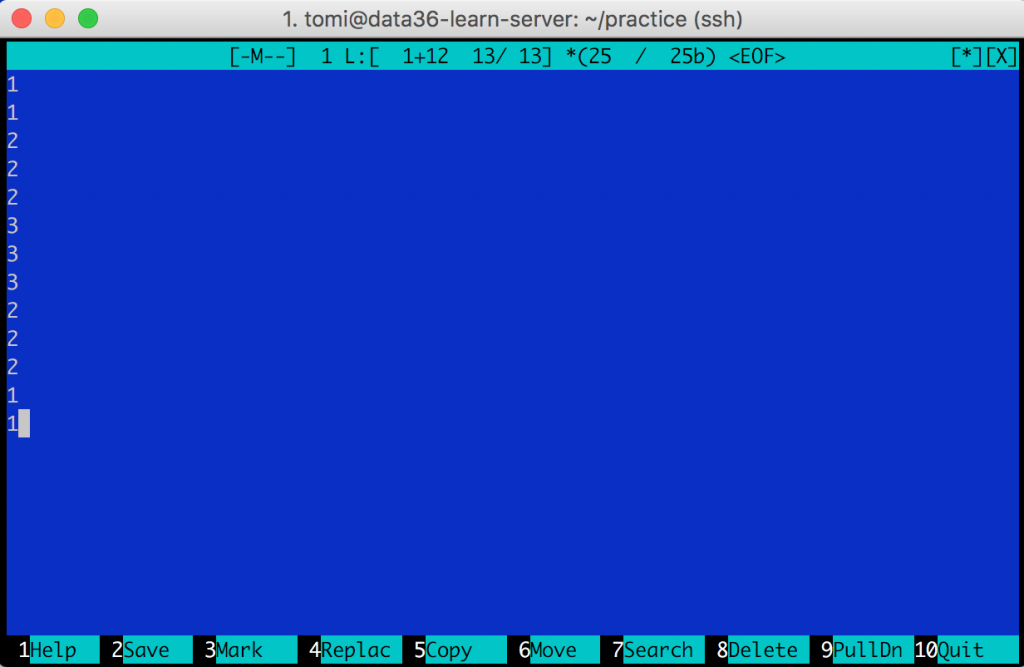 I called my new file demo3.csv (just to stay consistent with the naming of my demo files).
And here’s a new command line tool. Try it:

uniq unifies multiple lines. The result that you get back is:

As you can see, it only unifies adjacent lines. Sometimes it’s useful (e.g. when you want to remove duplicates), but in data science, we usually combine it with sort, so you can get a list of each unique value of your data set.

Note that this result is exactly the same as you would get if you typed sort -u. Type this:
sort -u demo3.csv

So why am I showing this to you? Because uniq has some pretty cool options. Here’s the one that I use the most.

How is this useful? Let’s do this exercise and you will find out!
Back to your flightdelays.csv file!

Question is: How many different destination airports do we have in our flightdelays.csv file?
..
..

Some explanation:
First you cut the Dest(ination) column (it’s the 18th). Then you sort and uniq the airport names. Then you count the number of lines with wc -l. The result is 311, but mind that there is a header line, which you should not count. This makes the real result 310.

List out the top 3 destination airports (by the number of arriving planes)!
..
..
Answer:

You cut the 18th column (Dest) again. sort the results and use uniq -c to count the number of occurrence of each value. You turn this into a “top list” with sort -n and you keep the top 3 with tail -3.
You have just found out with bash + command line which airports were most frequently flown to in 2007! Now imagine that these are not airports, but users, and we are talking not about airport-landing, but feature usage… This is something that actual online data analysts do from time to time when they are doing their jobs!

In data science it’s a pretty common case that you are working with live or semi-live data.

E.g. many startups run their analyses every midnight, so when the decision makers go to the office on the next morning, they can see the updated numbers and charts.

Of course it doesn’t mean that an analyst sits there and pushes the buttons every midnight. More like, smart analysts and data scientists create scripts that automatically run every midnight.

To run automatic data processes you need to do a few things:

I remember when I wrote my first bash script (which was actually my first data script as well), I was very surprised at how easy it is. A data script is nothing else but the commands – that you would type to the command line – listed one after another in a text file. That’s it.

Let’s try it out!
mcedit demoscript.sh

For a start, let’s go with a very simple script – type this into your editor. 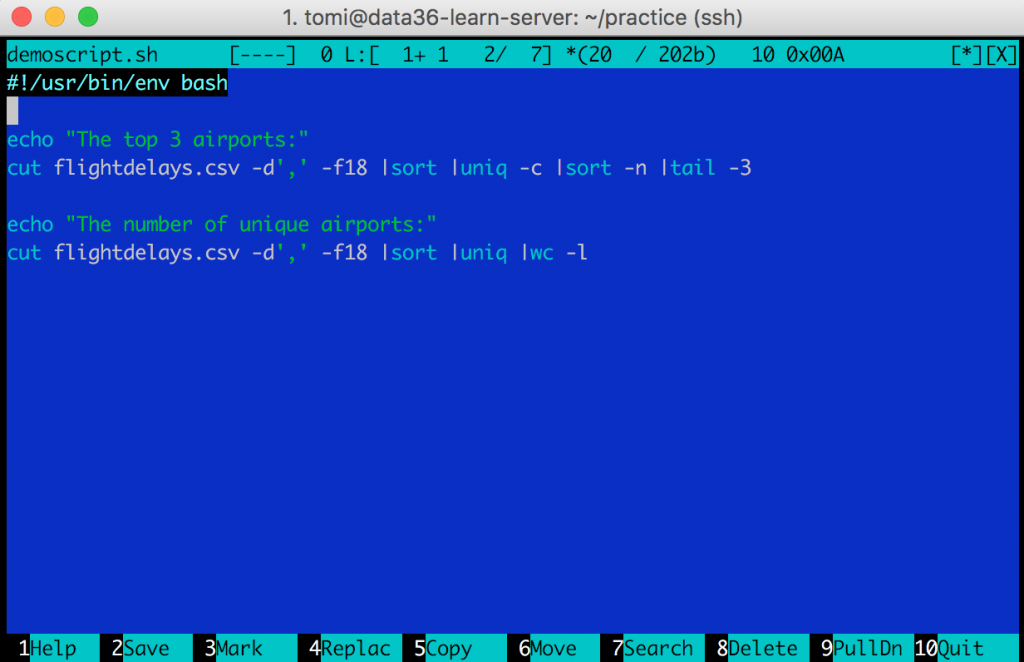 What your script will do:
#!/usr/bin/env bash –» this line is called the shebang. Its only job is to tell Ubuntu that your script is in bash. (You can write similar scripts in Python, R, SQL, etc… I’ll show you how!)

Your script’s extension is .sh, which stands for Shell Script. If you don’t add the .sh, that won’t cause any practical difference.

Let’s try to run your script in your folder with this syntax:
./demoscript.sh
The answer will be an error message (Permission denied).

The issue is that running a script in the command line needs permission. Fortunately you can give this permission for yourself by typing this command:
chmod 700 demoscript.sh

And the magic happens:

Your script executes the commands you typed line by line and gives back the results on your Terminal screen!
Well, this was just a very brief intro into bash scripting, but I guess you have already learned a lot today! 😉

We went through many many important things in this article. uniq and sort are very useful commands to use for actual analysis of your data. Bash scripting supported with mcedit will be a great ally of yours as well during your data science career!
In the next bash tutorial I’ll continue with the top command line tools and tricks that make data coding life easier! (Update: I released the next episode too!)