So far we have worked with the most essential concepts of Python: variables, data structures, built-in functions and methods, for loops, and if statements. These are all parts of the core semantics of the language. But this is far from everything that Python knows… actually this is just the very beginning and the exciting stuff is yet to come. Because Python also has tons of modules and packages that we can import into our projects… What does this mean? In this article I’ll give you an intro: I’ll show you the Python import statement and the most important built-in modules that you have to know for data science!

If you haven’t done so yet, I recommend going through these articles first:

Okay, so what is the import statement and why is it so important?

So far we have played around with the base elements of our LEGO playset. But if you want to build something complex, you have to use more advanced tools.

If you use import, you can get access to the advanced Python “tools” (they are called modules).

These are divided into three groups:

Anyway, import is a really powerful concept in Python – because with that you’ll be able to expand your toolset continuously and almost infinitely when you are dealing with different data science challenges.

The most important Python Built-in Modules for Data Scientists

Okay, now that you get the concept, it’s time to see it in practice. As I have mentioned, there is a Python Standard Library with dozens of built-in modules. From those, I hand-picked the five most important modules for data analysts and scientists. These are:

You can easily import any of them by using this syntax:

Note: This will import the entire module with all items in it. You can import only a part of the module, too: from [module_name] import [item_name]. But let’s not complicate things with that yet.

Let’s see the five built-in modules one by one!

Randomization is very important in data science… just think about experimenting and A/B testing! If you import the random module, you can generate random numbers by various rules.

Let’s type this to your Jupyter Notebook first:
import random

Then in a separate cell try out:
random.random()

This will generate a random float between 0 and 1.

This will generate a random integer between 1 and 10.

If randomization is important, statistics is inevitable!
Lucky for us, there is a statistics built-in module which contains functions like: mean, median, mode, standard deviation, variance and more…

Then calculate all the above mentioned values for this small list: 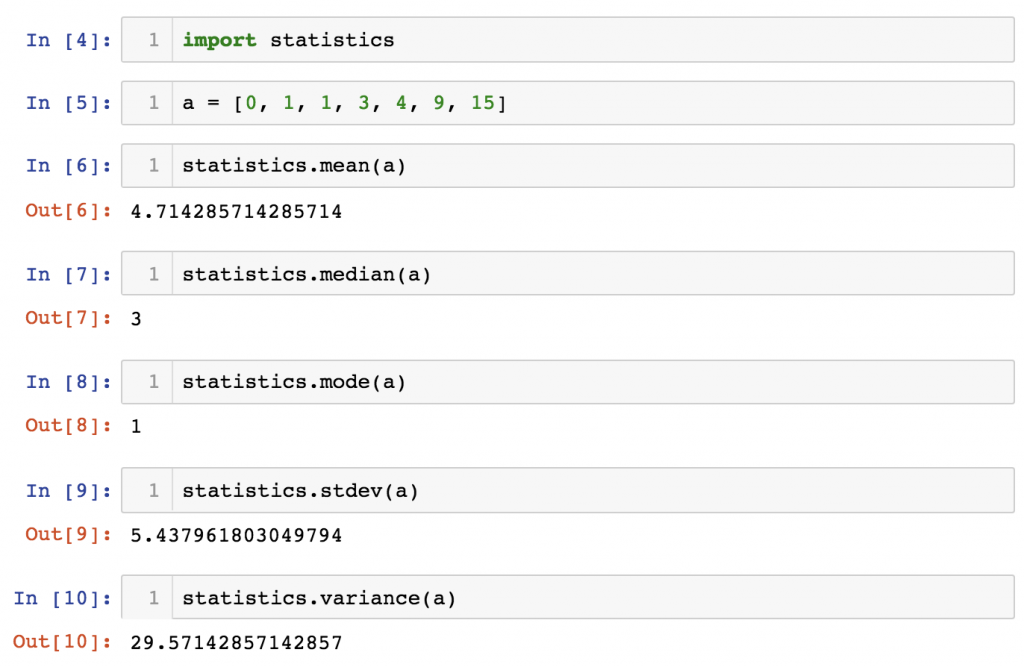 There are a few functions that are under the umbrella of math rather than statistics. So there is a separate module for that. This contains factorial, power, and logarithmic functions, but also some trigonometry and constants.

Do you plan to work for an online startup? Then you will probably encounter lot of data logs. And the heart of a data log is the datetime. Python3, by default, does not handle dates and times, but if you import the datetime module, you will get access to these functions, too.

To be honest, I think the implementation of the datetime module of Python is a bit over-complicated… at least, it’s not easy to use for beginners. I’ll write a separate article about it later. But for now let’s try these two functions to get a bit more familiar with it:

“csv” stands for “comma-separated values” and it’s one of the most common file formats for plain text data logs. So you definitely have to know how to open a .csv file in Python. There is a certain way to do that – just follow this example.

Let’s say you have this small .csv file. (You can even create it in Jupyter.) fruits.csv:

If you want to open this file in your Jupyter Notebook, you have to apply this code:

As you can see, it returned Python lists. So with the list selection features and with the list methods that we have learned previously, you can also break down and restructure this data.

This is a good start but far from the whole list of the Python built-in modules. With other modules you can zip and unzip files, scrape websites, send emails, encode and decode JSON files and do a lot of other exciting things. If you want to take a look at the whole list, check out the Python Standard Library which is part of the original Python documentation.
And, as I mentioned, there are other Python libraries and packages that are not part of the standard library (like pandas, numpy, scipy, etc.) – I’ll write more about them soon!

Now that you have seen how import works, let’s talk briefly about the syntax!

So what’s the name of it? Package? Module? Function? Library?

When I first encountered this import concept, I had a hard time understanding what exactly I was importing. In some cases these things were referred as “modules”, some cases as “packages”, in other cases as “functions”, and sometimes as “libraries”.

Note: Even if you check numpy and pandas – the two most popular data science related python libraries (or packages??). One is called library, the other is called a package.

Truth be told, I’m not a big fan of academical or theoretical questions in programming, like how we name things. But I have to admit that if you want to keep up a meaningful discussion with a developer (or even just ask a question on Stackoverflow), you have to have at least a clue about what is what.

So here is the result of my research – a little bit simplified of course:

The best answers I found on this topic are below this Stackoverflow question.

import is an essential and powerful concept within Python. The more you learn about data science, the better you will understand that you will have to continuously expand your toolset for the different challenges you will face. import is the ultimate tool for that. It opens up thousands of new doors. In my upcoming articles I’ll introduce the most important Python libraries and packages you have to know as a data scientist!