Where we did we leave off? Oh, right, we learned about how to use variables in Python. Here is the second essential topic that you have to learn if you are going to use Python as a Data Scientist: Python Data Structures!

Note: This is a hands-on tutorial. I highly recommend doing the coding part with me – and if you have time, solving the exercises at the end of the article! If you haven’t done so yet, please go through these two articles first:

Why care about Python Data Structures?

Imagine that you have a book on your desk. I have one on mine: P. & A. Bruce: Practical Statistics for Data Scientists. If I want to store this info in Python, I can put it into a variable. 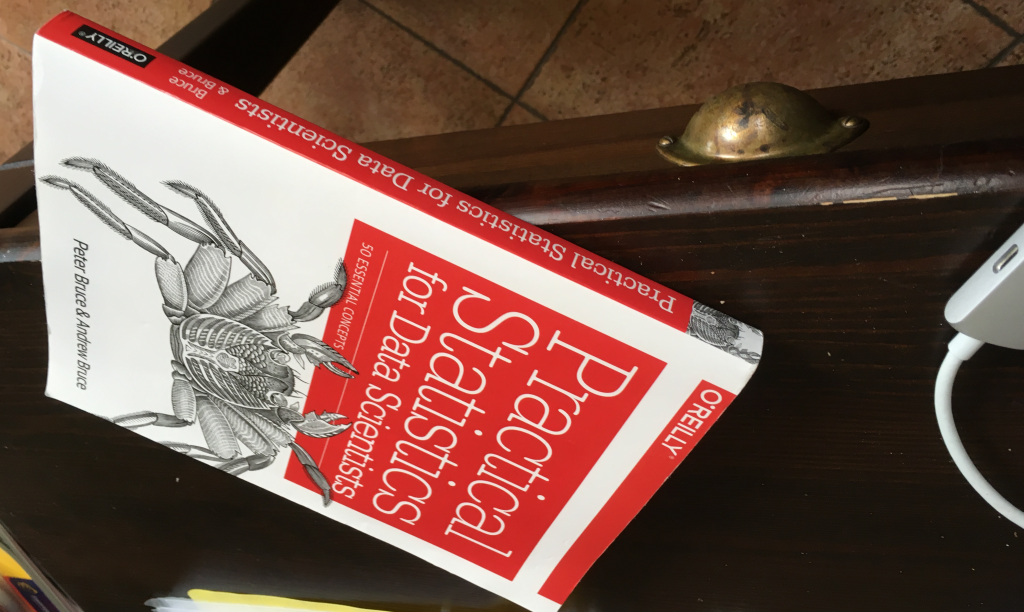 Done!
But hey, I just missed two more books on the other side of my desk! Dan Brown: Digital Fortress and George R. R. Martin: A Game of Thrones. How do I store these two new pieces of information… Maybe I can set up two new variables:

Wait a minute! I’ve just realized I have a whole bookshelf behind me…
Are you seeing the problem? Sometimes in Python we need to store relevant information together in one object – instead of several small variables.
This is why we have Data Structures!

All three are good for different things and you have to use them slightly differently…
Let’s dig into the practical details!

The Python list part of this tutorial is available in video format, too — but you can scroll down for the same thing in text format.

Start with the simplest one: Python lists.
A list is a sequence of values. Basically, it’s data put into brackets and separated by commas. An easy example – a list of integers:

It’s important to know that in Python, a list is an object – and generally speaking it’s treated like any other data type (e.g. integers, strings, booleans, etc.). This means that you can assign your list to a variable, so you can store and make it easier to access:

A list can hold every other type of data, not just integers – strings, Booleans, even other lists. Interesting, huh? Do you remember Freddie, the dog from the previous article?

You can store his attributes in one list instead of 5 different variables:

Now let’s say that Freddie has two belongings: a bone and a little ball. We can store those belongings as a list inside our first list.

Actually we can do this list-in-a-list thingy infinite times – and believe it or not, this simple concept (the official name is “nested lists,” by the way) will be essential when it comes to the actual Data Science part of Python – e.g. when we create some multidimensional numpy arrays to run correlation analyses… but let’s not get into it yet! The only thing you should remember is that you can store lists in lists.

Do you feel scientific? You should, because you have just created a 3-by-3 2D matrix.

Now that we have stored these values, it’s really essential to know how to access them in the future. As you have already seen, you can get the whole Python list returned if you type the right variable name.
E.g.

But how do you call one particular item from your list? Firstly, think a bit about how you can refer to a value in theory… The only thing that comes into play is the position of the value. E.g. if you want to call the first element on the dog list, you have to type the name of the list and the number of the element between brackets, like this: [1]. Try this:

What??? 9 was the second element on the list, not the first. Well, not in Python… Python uses so-called “zero-based indexing”, which means that the first element’s number is [0], the second is [1], the third is [2] and so on. This is something you have to keep in mind, when working with Python Data Structures.

Note: “But why is that?” Hmm, tough topic! I don’t dare to say, “because of nerds…” So instead, I’ll just link this nice open letter by Prof Dijkstra from 1982: http://www.cs.utexas.edu/users/EWD/transcriptions/EWD08xx/EWD831.html
Anyway, don’t think too much about this… Just accept and apply this strange rule! 🙂

But here’s a detailed example!
Freddie the dog:

Try to print all the list elements one by one: 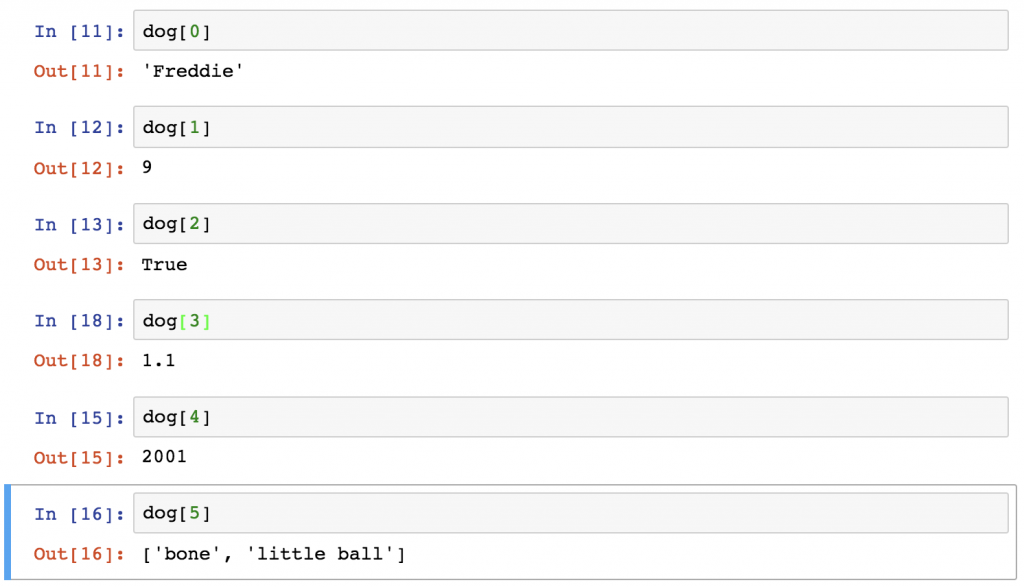 Twisted… But you will get used to it!

One more thing about Freddie! We want to print his belongings one by one!

Can you find out how to get the ‘bone’ element, which is located in a nested list? Actually it’s super-intuitive.

It’s gonna be the zeroth element of our fifth element! The syntax is:
dog[5][0]

One more trick you might wanna know about! You can use a colon between two numbers in your brackets, so you can get a sequence of list items.

We’ll get back to this feature later in details!
…

This is everything you need to know about Python lists for now!

What is a Python tuple? First of all: as a junior/aspiring Data Scientist, you don’t have to care too much about tuples. If you want you can even skip this section.

If you have stayed:
A Python tuple is almost the same as a Python list, with a few small differences.

Other than that, you can use a tuple pretty much the same way as a list. Even returning an item happens via the same bracket frames method. (Try: book_tuple[1] for your freshly created tuple.)

Again: none of the above will be your concern when you just start off with Python coding, but it’s good to know at least this bit about tuples.

Dictionaries are a whole different story. They are actually very different from lists – and very commonly applied and useful in data science projects.

The main concept of dictionaries is that for every value you have a unique key. Take a look at Freddie the dog again:

These are the values that we want to store about a dog. In a dictionary you can attribute a key for each of these values, so you can understand better that what value stands for what.

As you can see the output is already formatted by Python… For better understanding you can do the same for yourself on the first hand – let’s put the key-value pairs into new lines:

As you can see, a nested list (belongings in this example) as a value in a dictionary is not a problem.

And this is how a Python dictionary looks!

How to access a specific element of a Python dictionary

Here’s the most important rule to remember when it comes to accessing any element of any kind of Python data structure: whether it’s a list, a tuple or a dictionary, you can print a specific item by typing the name of your data structure (eg. dog) and the unique identifier of the element between brackets (eg. [1]).

The same goes for dictionaries.
The only difference is that while in lists and tuples the unique identifier was the number of the element – in a dictionary it’s the key. Try this:

Note 1: maybe you are wondering whether you can still use a number to call a dictionary value. It’s not possible, because Python dictionaries are unordered by definition – this means none of the key-value pairs have a number in the dictionary. You can check this right away if you put in a new dictionary – when you call it back to your screen, it’ll change your original order to alphabetical order. (Check above!)

Note 2: maybe you are also wondering if you can return a key by inputting a value and not just a value by inputting a key. Bad news: it’s not possible – Python is simply not made for that.

Tadaaa! End of the article! It’s time to test yourself! You have learned a lot of important new things about Python Data Structures today. If you haven’t been doing the “Test yourself” sections in my articles, please make an exception for this one. Python Data Structures are something that you will use all the time when you work as a Data Scientist, so do yourself a favor and practice a bit to understand the topic 100%! 🙂

test[0] –» This will print the whole dictionary from our main list.

test[4] –» Same as the previous two – it will print the nested list.

test[0]['Arizona'] –» This is basically the next step of exercise #2 – we are calling the 'Phoenix' value with its key: 'Arizona'.

test[4][2] –» And this one is related to exercise #3 – referring to'jeans' by its number – don’t forget the zero-based indexing. 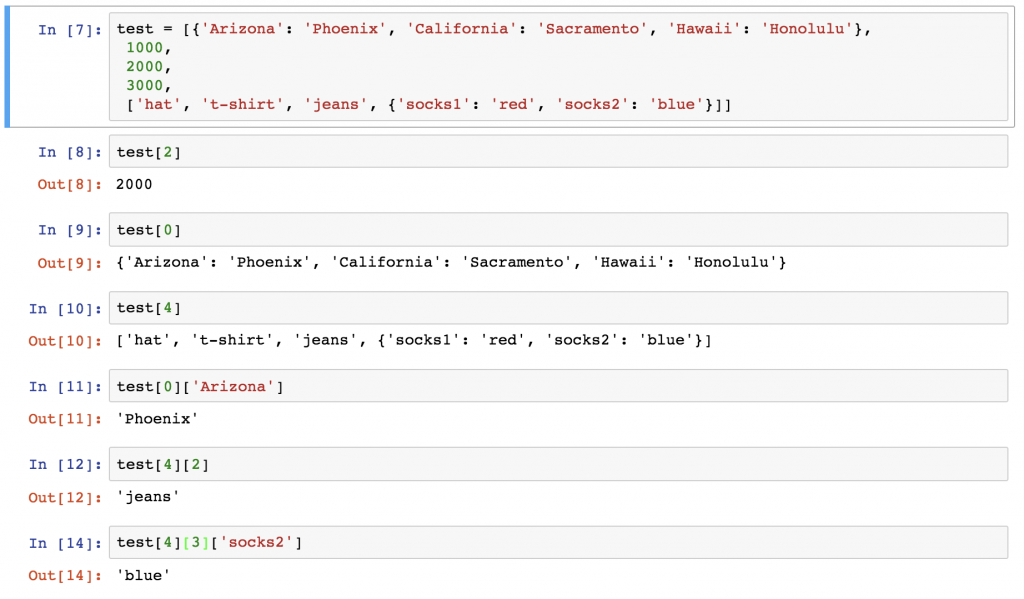 Nice. Job. You are done with another Python tutorial! This is almost everything you have to know about Python Data Structures! Well, in fact, there will be a lot of small, but important details (e.g. how to add, remove and change elements in a list or in a dictionary)… but to get there we need to talk a little bit about Python functions and methods, and some other exciting things first! Continue here:
Python Functions and Methods