Polynomial Regression in Python using scikit-learn (with a practical example) 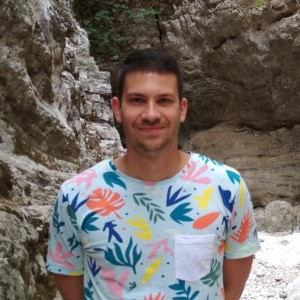 If you want to fit a curved line to your data with scikit-learn using polynomial regression, you are in the right place. But first, make sure you’re already familiar with linear regression. I’ll also assume in this article that you have matplotlib, pandas and numpy installed. Now let’s get down to coding your first polynomial regression model.

If you don’t have your own Python environment for data science, go with one of these options to get one:

Bad news: you can’t just linear regression your way through every dataset. 😔

Oftentimes you’ll encounter data where the relationship between the feature(s) and the response variable can’t be best described with a straight line.

See the problem? Of course we could fit a straight line to the data, but just by looking at the scatterplot we get the feeling that this time a linear line won’t cut it.

If you think that the line should somehow be curved to better fit the data, then you intuitively understand why we use polynomial regression: it gives us the curvature we need so we can have more precise predictions based on our data.

But let’s hold our horses just yet. 🐴

Why is it called a “polynomial”?

That’s what we’ll discover in the next section.

What is a polynomial? The most important definitions you need to know.

Let’s break it down:

Here’s an example of a polynomial:

4x + 7 is a simple mathematical expression consisting of two terms: 4x (first term) and 7 (second term). In algebra, terms are separated by the logical operators + or -, so you can easily count how many terms an expression has.

9x2y - 3x + 1 is a polynomial (consisting of 3 terms), too. And to confuse you a bit, 3x is also a polynomial, although it doesn’t have “many terms” (3x is called a monomial, because it consists of one term – but don’t worry too much about it, I just wanted to let you in on this secret 🤫).

Now I want you to take a close look at the plot – what do you see? A straight line! 😮

Nice. Can we start coding already?

Before we get to the practical part, there’s some more things you need to know.

We’ll use 3x4 – 7x3 + 2x2 + 11 to improve your polynomial related vocabulary with some essential definitions:

Now that you speak proper polynomial lingo, I’d like to give you an official definition. An expression is a polynomial if:

If you’ve been paying attention, you may wonder: how is 4x + 7 a polynomial when the second term (7) clearly lacks the variable x?

The difference between linear and polynomial regression.

In the context of machine learning, you’ll often see it reversed:

It’s not a coincidence: polynomial regression is a linear model used for describing non-linear relationships.

How is this possible? The magic lies in creating new features by raising the original features to a power.

For instance if we have feature x, and we’ll use a 3rd degree polynomial, then our formula will also include x2 and x3. And this is what gives curvature to a line:

What I’m trying to hammer home is this: linear regression is just a first-degree polynomial. Polynomial regression uses higher-degree polynomials. Both of them are linear models, but the first results in a straight line, the latter gives you a curved line. That’s it.

For starters, let’s imagine that you’re presented with the below scatterplot:

Here’s how you can recreate the same chart:

It’s nothing special, really: just one feature (x), and the responses (y).

Now, let’s say that you’ve got a hunch that the relationship between the features and the responses is non-linear, and you’d like to fit a curved line to the data.

Since we have only one feature, the following polynomial regression formula applies:

In this equation the number of coefficients (ßs) is determined by the feature’s highest power (aka the degree of our polynomial; not considering ß0, because it’s the intercept).

Fortunately, there are answers to both questions.

Answer 1.: there are methods to determine the degree of the polynomial that gives the best results, but more on this later. For now, let’s just go with the assumption that our dataset can be described with a 2nd degree polynomial.

STEP #1: Determining the degree of the polynomial

Then save an instance of PolynomialFeatures with the following settings:

degree sets the degree of our polynomial function. degree=2 means that we want to work with a 2nd degree polynomial:

include_bias=False should be set to False, because we’ll use PolynomialFeatures together with LinearRegression() later on.

Long story short: LinearRegression() will take care of this setting by default, so there’s no need to set include_bias to True. If it wasn’t taken care of, then include_bias=False would mean that we deliberately want the y intercept (ß0) to be equal to 0 – but we don’t want that. Here’s a great explanation on all of this.

If you print poly, you see that so far we’ve just created an instance of PolynomialFeatures, and that’s all there’s to it:

Onto the next step:

reshape(-1,1) transforms our numpy array x from a 1D array to a 2D array – this is required, otherwise we’d get the following error:

There’s only one method – fit_transform() – but in fact it’s an amalgam of two separate methods: fit() and transform(). fit_transform() is a shortcut for using both at the same time, because they’re often used together.

Since I want you to understand what’s happening under the hood, I’ll show them to you separately.

With fit() we basically just declare what feature we want to transform:

We wanted to create x2 values from our x values, and fit_transform() did just that. We save the result to poly_features:

Now it’s time to create our machine learning model. Of course, we need to import it first:

Hold up a minute! 😮 Isn’t this tutorial supposed to be about polynomial regression? Why are we importing LinearRegression then?

Just think back to what you’ve read not so long ago: polynomial regression is a linear model, that’s why we import LinearRegression. 🙂

Let’s save an instance of LinearRegression to a variable:

Here’s the code in real life:

Then we fit our model to our data:

Fitting means that we train our model by letting it know what the feature (poly_features) and the response (y) values are. When fitting/training our model, we basically instruct it to solve for the coefficients (marked with bold) in our polynomial function:

After running the code you may think that nothing happens, but believe me, the model estimated the coefficients (important: you don’t have to save it to a variable in order for it to work!):

Now that our model is properly trained, we can put it to work by instructing it to predict the responses (y_predicted) based on poly_features, and the coefficients it had estimated:

Here you can see the predicted responses:

Let’s do some dataviz to see what our model looks like:

I think the plot’s title says it all, but I’d like to repeat it: congratulations, you’ve created your very first polynomial regression model! 👏

While you’re celebrating, I’m just gonna paste the code here in case you need it:

Oftentimes you’ll have to work with data that includes more than one feature (life is complicated, I know). Let’s simulate such a situation:

np.random.seed(1) is needed so you and I can work with the same “random” data. (Read this article if you want to understand how it is possible.) We create some random data with some added noise: x_1 contains 100 values for our first feature, x_2 holds 100 values for our second feature. Our responses (100) are saved into y, as always.

Let’s plot both features, just to get a visualized understanding of the relationships between the features and the responses:

For your convenience, here’s the code:

STEP #1: Storing the variables in a dataframe

Then we create a pandas dataframe where we’ll store our features and responses:

This is the resulting dataframe:

STEP #2: Defining the training and the test data

Now we turn to scikit-learn again:

train_test_split helps us split our data into a training and a test dataset:

Here’s a step by step explanation:

Now let’s create and fit our model, but this time, we’ll train our model only on the training data:

The reason for us training our model only on the training data is that later we want to see how well our model will predict responses based on feature values it hasn’t seen before.

Here’s how we can test how our model performs on previously unseen data:

It may be a lot to take in, so let me elaborate on it:

If you print poly_reg_rmse, you’ll get this number:

Now let’s create a linear regression model as well, so we can compare the performance of the two models:

As you can see, the steps are the same as in the case of our polynomial regression model. There’s one important difference, though. In the train_test_split method we use X instead of poly_features, and it’s for a good reason. X contains our two original features (x_1 and x_2), so our linear regression model takes the form of:

If you print lin_reg_model.coef_ you can see the linear regression model’s values for ß1 and ß2:

You can similarly print the intercept with lin_reg_model.intercept_:

On the other hand, poly_features contains new features as well, created out of x_1 and x_2, so our polynomial regression model (based on a 2nd degree polynomial with two features) looks like this:

x12 and x22 need no explanation, as we’ve already covered how they are created in the “Coding a polynomial regression model with scikit-learn” section.

But let’s get back to comparing our models’ performances by printing lin_reg_rmse:

But you know what else is spectacular?

Hopefully you’ve gained enough knowledge to have a basic understanding of polynomial regression. Not only that, you should also know one method (RMSE) for comparing the performance of machine learning models.

Throughout this article we used a 2nd degree polynomial for our polynomial regression models. Naturally, you should always test before model deployment what degree of polynomial performs best on your dataset (after finishing this article, you should suspect how to do that! 😉).

Thank you for reading this article, and have fun with your new knowledge!